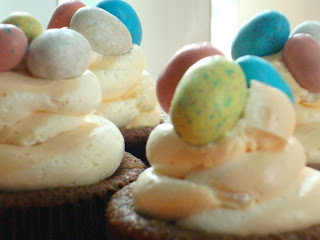 Eeek! Ever have one of those days you just should not have done what you planned to do? Well that was yesterday for me, I had been looking forward all week to making some Easter cupcakes, however yesterday my baking experience sort of turned into a comedy of errors. I was absolutely shocked that I did not just toss in the hat and decide to do without a sweet Easter treat and indulge myself in a store-bought Cadbury.
I had this great plan...I absolutely love a Cadbury cream egg (or two) around Easter time, so I thought how great to make a Cadbury cream filled cupcake? Not too difficult, I found a recipe online to make "homemade Cadbury cream eggs". I used the for the filling (sans chocolate) and then made a basic chocolate cupcake recipe for the and although the frosting a difficult decision, ended up using a Swiss meringue buttercream (big surprise right). So there you have it for the components and now for the technique. 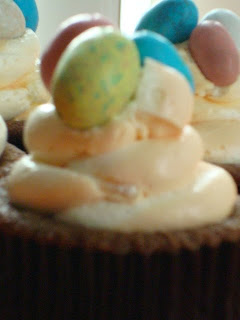 First off, make your cupcakes. I used a chocolate sour cream cupcake recipe which matched the texture of the cream pretty well. It is a bit more of a dense cake but not too rich so it isn't too overpowering. You could of course use a box devils food or even a German chocolate cake mix that would do just fine. As these are baking/cooling, go ahead and make your cream. Allow to sit in the fridge to set, I did not allow to set for 2-3 hrs as the recipe suggests, I allowed maybe half an hour. Once the cream is set, take a small amount of the white cream with a small amount of the orange cream and roll into a small ball. When the cupcakes are cooled, cut a circle out of the center, place your ball of cream in the hole, and then push the cake circle top back into the hole it was removed from. There you go, now they are ready for the final addition of frosting. 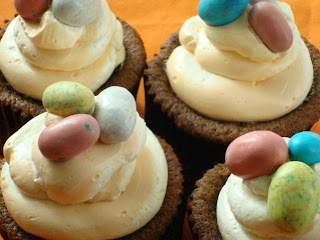 Oh the frosting...here is where my problems began. I started this venture with not only one batch of Swiss meringue frosting flopping, but two! I had just enough eggs to complete this baking process, but after ruining one batch of frosting, I had to go back to the store for more eggs, can you believe it! So after returning from the store I decided that it was either 3rd times a charm or I was done with the frosting! Fortunately it worked! I then took the frosting and colored a third of it orange and left the rest white. I had this great idea to stripe my piping bag with the orange to get the same look as the Cadbury cream eggs have, unfortunately it did not turn out as well in real life as in my head ;) On top of it, as I was placing the orange color in my piping back, about a cup or so of it plopped all the way down my dishwasher and onto the floor, UGH! Fortunately my sweet hunnybuns cleaned it up for me as I almost walked in it a number of times! 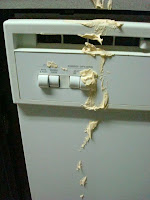 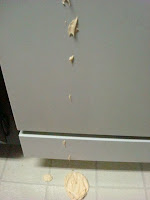 Nice right!
So once the frosting was complete, I piped it atop each cupcake and finished the off with 3 mini Robin Egg Whoppers. YUMMY!!! These little cupcake pack a punch, let me tell you! They are rich and delish and I bet you cannot eat more than one. Give them a try, they are mighty good! Happy baking...happier eating! 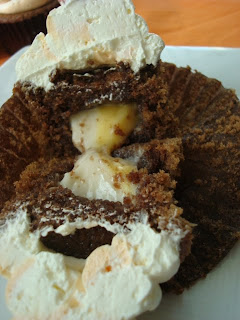