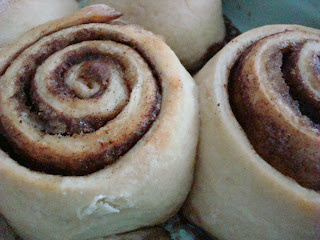 Yummy yum I say whenever I think about a homemade cinnamon roll, or really anything that has butter, cinnamon, sugar and thick creamy frosting all in one. There is something about cinnamon and sugar that just makes me float to cloud 9. As much as I love a good chocolate dessert, cinnamon brings me a unique feeling of taste-bud ecstasy in which I find myself actually licking my plate. Such manners!

My roommates from college can attest to my cinnamon addiction. I used to love these doughy treats made from Domino's Pizza of all places, called 'cinna-balls' and I would pretty much eat them all myself and let me tell you, there were a lot of them! Now I must be honest, there is a very high percentage of cinnamon rolls that I truthfully cannot stomach. In fact many cinnamon rolls whether they are from Cinnabon, local bakeries or doughnut shops quite literally make me nauseated. I believe it is something in the dough that just sets me off. So whenever I have a craving for dough rolled with cinnamon and sugar and frosting, it must be homemade!

I have tried a number of cinnamon roll recipes, and although all of them have been satisfactory, I still have not found one that is perfect. And unfortunately, this recipe did not live up to the "ultimate cinnamon roll" as it claims. So I am still on a search. That being said, it was pretty decent, and may be perfect for your taste-buds, so give it a try!
My assessment:
So here is the recipe: I am posting the full recipe although I halved the recipe given Barry and I can only eat so much sugary goodness in a day! Half recipe made 6 large rolls.
Frosting:  I actually had some frozen cream cheese frosting left over from a recent cake, so I just used that instead of making new frosting, but here is the frosting recipe from the above roll recipe.
Directions:
Add the warm water to the yeast and soak 10 minutes.
Scald milk; pour over the shortening. Add sugar and salt and cool to tepid. Add the dissolved yeast and beaten egg. Add 4 cups flour adding one at a time beating after each addition. 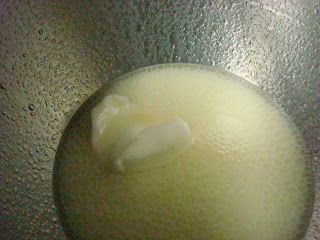 this is the scalded milk, shortening, sugar, and salt mixture
Dough should be soft yet firm enough to handle. Knead on floured board until elastic and smooth. Avoid too much flour. Turn dough into well oiled bowl. Let rise for 1-1/2 hours. 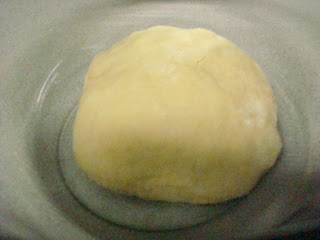 this is dough before it has risen 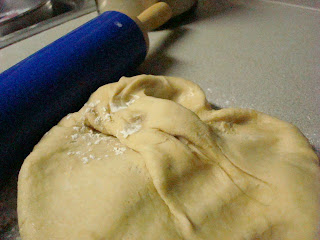 this is dough after it has risen, it at least double in size
Press dough down and divide into workable size. Roll dough out into a rectangle. Cover with melted butter. Layer with a generous thick layer* of brown sugar. Sprinkle on cinnamon* as desired. If you like raisins, layer on a layer of raisins. Roll up jellyroll fashion. 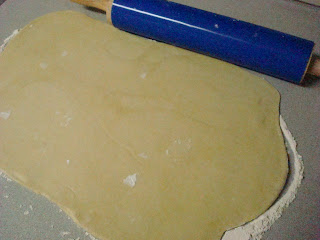 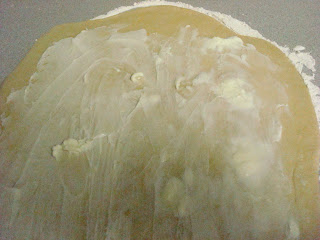 I spread a thin layer of butter (instead of using melted butter)
Using a scissors or a piece of string, cut off slices about 1 to 1-1/2 inches thick. Place slices in an 8 or 9 inch round greased cake pan. Place one slice in the middle and other slices around it. Press rolls down to even out and fill pan. Let rise until rolls fill the pan generously...about another hour. 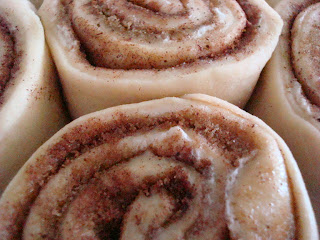 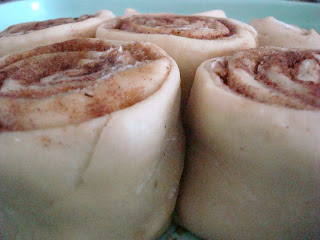 Bake in a 350 degree F oven about 15 - 20 minutes. If rolls get too brown, cover with a piece of tine foil until the end of baking. Do not over bake rolls.
Remove immediately from pan by inverting onto a plate and then tip over onto another plate to right the rolls.
For the Frosting:
In a medium bowl, place sugar, butter and vanilla. Then stir in enough milk or cream to reach a thick, hardly-able to stir consistency.
Spread over warm rolls as soon as they are placed on a plate to let the frosting melt and run into the rolls. 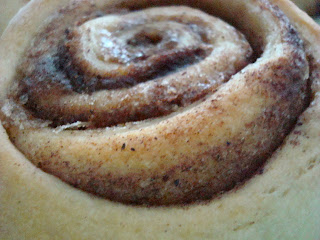 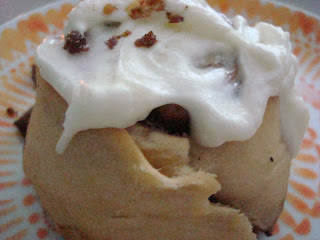