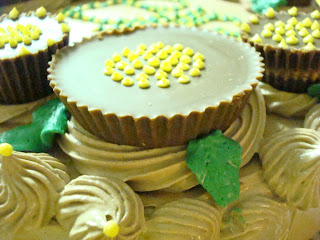 All I can say if you are reading this is...be jealous...be very very jealous...that you are not sitting next to me eating this moist, buttery, dense, and surprisingly light cake. Unfortunately, even the best of writers could likely not do this cake justice with words; the only way to experience it is to taste it! So come on over, I'll put the coffee on and cut you a slice!

So if you could not tell from the pictures...this was a cake for my hunnybun's birthday which was yesterday (March 12th). He, unlike me, thinks of birthdays as just another day. I, on the other hand, think of them more as National holidays that last roughly one week, it is more fun that way! I think after 6 years of being together, he has started to get used to my birthday (holiday) celebrations, but he likes to keep his to a minimum. This being said, sadly, this is only the 2nd (or 3rd) birthday cake I have made him in 5 birthdays. It is not that I forgot the others, but I like to make him other things he likes on his birthday. For example, one year I made a BUNCH of chocolate peanut butter whoopie-pies stacked into a pyramid shape, resembling a cake, with candles in the top. 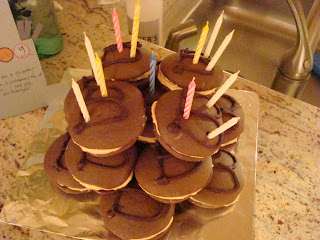 Needless to say, I have decided from this point on in our journey through life and growing up (not old :) ) together, I will only make cakes on his special day, because everyone needs a birthday cake made just for them on their birthday!
Now for the plan, I actually thought of the design and components of the cake about a month and a half ago (call me a planner). I wanted to incorporate his favorite things into my favorite thing...cake! So I asked for his input on the flavor of cake and frosting and went from there. He wanted a yellow cake with chocolate Swiss buttercream...YUMMMMMM-EEE! My hunny loves REESE'S peanut butter cups and he is always asking me to make mini muffin brownies with mini REESE'S cups pressed into the tops, so naturally I was planning on including both of these into the final product. 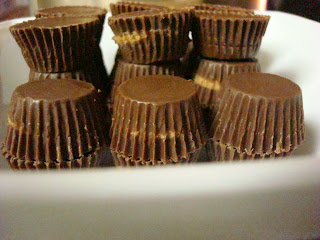 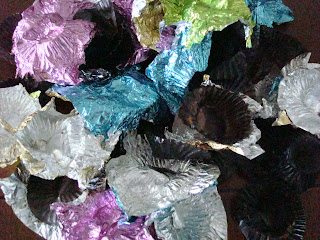 As for the design, I wanted to do something BIG, naturally tiers would be in order, and after looking at so many wedding cakes...I had a great idea! I love the wedding cake style in which they have multiple tiers of cake separated by tiers of flowers (see pic), so I thought of doing two tiers of cake, separated by a tier of REESE'S and brownie mini muffins. 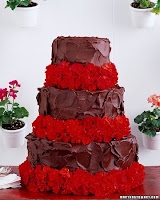 For the cake, I used a recipe from Martha Stewart (of course) and changed it to make it a little more dense and moist. I made the bottom layer of the cake in an 8"x4" circle pan and the top layer in an 8"x2" circle pan.
As for the brownies...I must admit, I used a box, Betty Crocker Original Brownies, to be exact, because Barry LOVES boxed brownies. I must admit, there is something nostalgic about boxed brownies. I remember as a kid when my mom would make brownies for us to have after school and I would always want to cut them when they were still hot so they would stick to the knife and I could peel it off and eat extra. Those were the days!
Finally for the frosting, I made about 6 cups of Swiss meringue buttercream, set aside about a cup of it to color for the design, and then added about a cup of melted chocolate chips to the rest to make it chocolate Swiss meringue.
As for the recipes...
CAKE:
Preheat oven to 350 degrees. Grease pans. In a medium bowl, whisk flour, pudding mix, baking powder, baking soda, and salt.
In a large bowl, using an electric mixer, beat butter and sugar until light and fluffy. With mixer on low, beat in eggs and yolks, one at a time. Beat is sour cream. Beat in vanilla. Alternately beat in flour mixture and buttermilk, beginning and ending with flour mixture; mix just until combined.
Divide batter between pans (2/3 in deep pan 1/3 in shallow pan); smooth tops. Bake until cakes pull away from sides of pans, 32 to 35 minutes (40 mins for deep pan). Let cool in pans 10 minutes. Run a knife around edges of pans and invert cakes onto a wire rack. Let cool completely.

BROWNIES:
Make brownies per instructions, spoon into mini muffin tins to fill 3/4 full. Bake for about 22-25 minutes. Let cool for about 5 minutes, then place one mini REESE'S cup on top of each brownie and press into the center of the brownie. Let sit until ready for assembly.

FROSTING:
Combine sugar and egg whites in mixer bowl, and set over a pan of simmering water. Whisk constantly until sugar is dissolved and mixture is 140 degrees on an instant-read thermometer.
Place chocolate chips in glass measuring cup and microwave until they are glossy, stir well until smooth. Set aside to cool.
Transfer bowl to mixer; whisk on medium-high speed until whites are fluffy and cooled, about 10 minutes. Continue to whisk until stiff, glossy peaks form.
Reduce speed to medium-low; add butter by the tablespoon, whisking well after each addition. Whisk in vanilla.
At this point, remove 1 cup of frosting and set aside to color. Place the cooled chocolate into the mixture and whisk until combined and smooth.

Ok now what the heck did I do with all of these fabulous components? First off, I took the thicker of the two cakes and split it into 3 even layers. Spread frosting in between each layer and cover the entire cake with a thin layer of frosting. Pop it into the fridge to set for about 20 mins. Do the same with the thinner layer, except only split it into 2 layers and place it on an 8" cardboard cake circle. Take the bottom layer out of the fridge; spread another layer of frosting on until smooth. Place 10 mini brownies around the circumference of the cake, next take 6 wooden dowels cut about 2" taller than the cake and push them into the cake in a circular fashion about a 1/2" medial to the brownies. Pipe on a decorative border around the bottom of the cake as well as the top. I used an open star tip and piped circular swirls. Place in fridge until the top layer is ready.

For the top, spread another layer of frosting on and while it is still moist, press the REESE'S cups on for the flowers (I used 5 mini REESE'S minis and 2 standard size cups). Tint the cup of frosting you set aside with gel paste color. I used green and yellow as these are Barry and my favorite colors :) With a circle tip (#2 or #3) pipe little dots in the center of each PB cup. With a leaf tip (#67 or #68) pipe on leave around the edges of the PB cup flowers. Pipe a border around the top of the cake, and pipe a message if you like on the top of the cake. Barry loves cakes with people's names on them, so I put his on there. Although I felt like a dork after doing so, because I rarely ever actually call him Barry, so it would have been better if I put one of his pet names on there :) but at this point, it was too late! Finally, place the top layer onto the wooden dowels (making sure it is even) and pipe a border around the bottom of the cake so as to hide the cardboard circle edge. 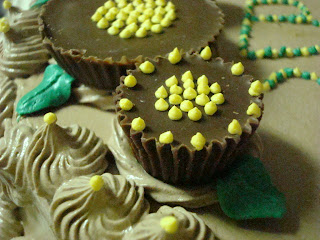 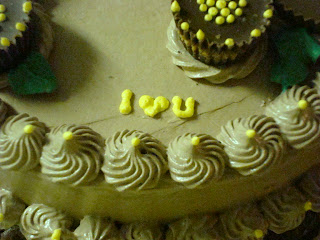 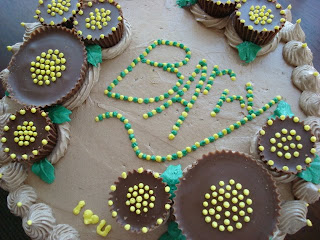 Simple as that, now all you have to do it eat it, which is obviously the easy part! Definitely give this cake a try, it is will leave you wanting more and more and it will make whom ever you are making it for feel very special. The chocolate Swiss meringue buttercream marries perfectly with this cake as it is not an overpowering rich chocolate taste and it is velvety smooth which goes well with the dense texture of the cake. However, I am pretty sure that any chocolate frosting would do! Happy baking...happier eating! 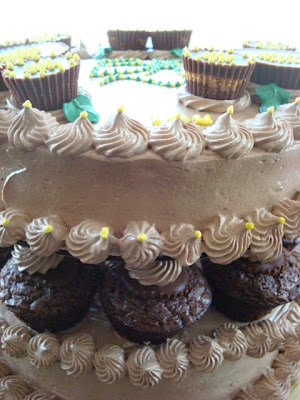 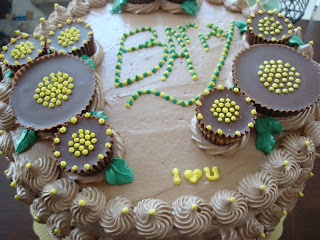 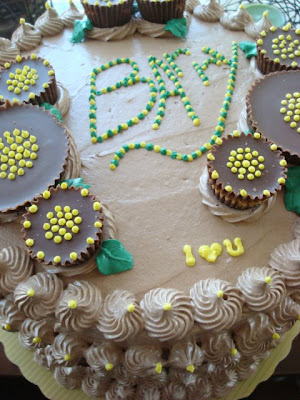